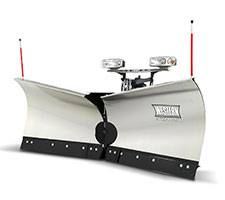 Introducing Stainless
• The WESTERN MVP 3 is now available in 14-gauge stainless steel, for low maintenance corrosion-resistant performance. With V-plow blades that soar from a 31” center height up to 39” at the outer edge on 9’ 6” models, you can cut through the big drifts, carry more snow, and get the job done fast. The MVP 3 in stainless is as hard working as it is sharp-looking.